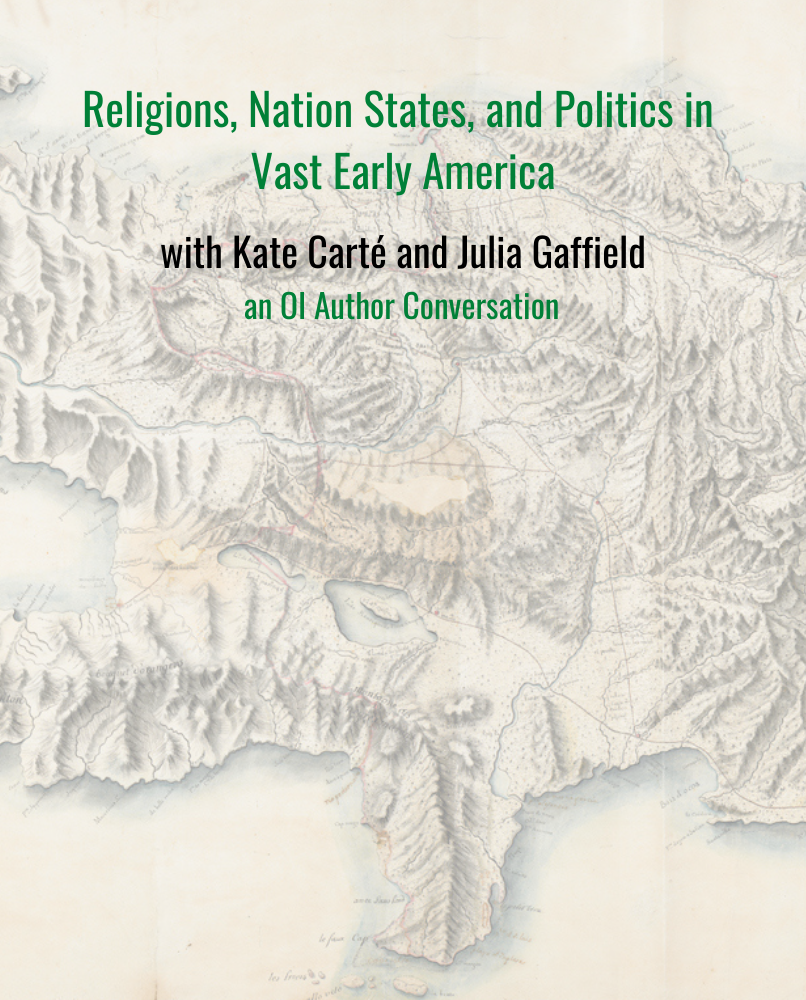 Join us for an OI Author Conversation with Kate Carté and Julia Gaffield.

How can we best understand the connections between religion, war, and political upheaval in the Age of Revolution?  Explorations into the intersection of politics and religion are often framed in terms of the impact of political upheaval on religious faith and practice.  Seen this way, religion figures as a barometer of political and social change. Yet specific denominations were fundamental components of systems that structured relationships within and between nations and empires.  Woven into structures of politics and diplomacy at the highest levels, they  could serve as expressions of national aspiration and as agents of political change. To understand religion’s role in Age of Revolution, we need to explore the formal connections between religious institutions on the one hand and political and diplomatic processes on the other.

Please join Kate Carté and Julia Gaffield for a discussion about the complex role of religion in the Age of Revolution.  Kate Carté is the author of Religion and the American Revolution: An Imperial History (2021), which situates British Protestantism as part of a complex, transatlantic system that bound religion to imperial politics until it was ruptured by the war for American independence. Julia Gaffield, the author of Haitian Connections in the Atlantic World (2015), is currently writing a book about Haiti’s efforts to leverage its diplomatic relationship with the Catholic Church in order to secure a place among the nineteenth century’s “family of nations.” Kate Carté (PhD, University of Wisconsin) is an associate professor of History at Southern Methodist University.  She is the author of Religion and Profit: Moravians in Early America (Philadelphia: University of Pennsylvania Press, 2009), and she has published articles in venues including Church History, the William and Mary Quarterly, Common-place, and Early American Studies. She has received fellowships from the ACLS, the McNeil Center for Early American Studies, the American Philosophical Society, and the Program in Early American Economy and Society at the Library Company of Philadelphia.  Her new book, Religion and the American Revolution: An Imperial History (UNC Press for the OI, 2021), chronicles how that pivotal conflict transformed both protestant institutions and the relationship between church and state. Julia Gaffield is an associate professor of History at Georgia State University. She received her PhD in History from Duke University and her research has been supported by grants and fellowships from the Mellon Foundation, the American Council of Learned Societies, and the Social Sciences and Humanities Research Council of Canada. Her first book, Haitian Connections in the Atlantic World: Recognition after Revolution, was published by the University of North Carolina Press in 2015 and won the 2016 Mary Alice and Frederick Boucher Book Prize from the French Colonial Historical Society. Gaffield published an article in the American Historical Review in 2020 called “The Racialization of International Law after the Haitian Revolution: The Holy See and National Sovereignty.” She is currently writing a biography of Jean-Jacques Dessalines and a history of the Catholic Church in Haiti in the 19th century.