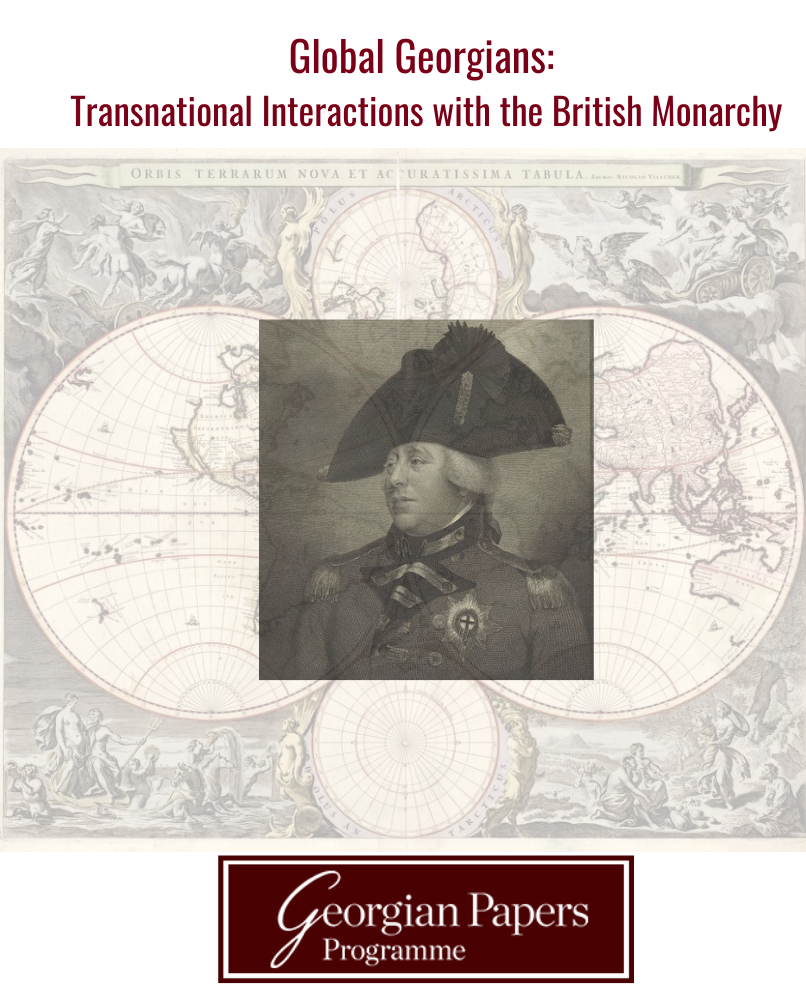 The Georgian Papers Programme (GPP) invites you to join us for a roundtable discussion about transnational interactions between the British monarchy and leader and peoples from around the globe.

This event builds on David Armitage’s time as the 2019 Sons of the American Revolution Visiting Professor at King’s College London. During his time with the GPP, Professor Armitage studied George III and the Law of Nations and our discussion will explore some of the insights from this project to understand more about connections between the British monarchy and the world outside of Europe. Three panelists will share short papers about their research into different parts of the world during, or just after, the reign of the Georgian monarchs. Charles Prior (University of Hull) will speak about ongoing research into the relationship between the British crown and Native American polities. Priya Atwal (University of Oxford) will discuss how royal blood framed Queen Victoria’s relations with Indian rulers and European princes in the mid-nineteenth century. And Henrietta Harrison (University of Oxford) will discuss work on British interactions with the Qing dynasty in China, particularly the role of translators, officials, and the Macartney mission.

After hearing from the panellists, Professor Armitage will share his response to the papers and then we will open the event up to questions, comments, and discussion from the audience. We hope you are able to join us. Charles Prior is Senior Lecturer in Early Modern History at the University of Hull, where he co-leads the research group Treatied Spaces. Among its projects is the AHRC-funded Brightening the Covenant Chain, which is concerned with diplomacy between the Haudenosaunee and the British Crown; the GPP is a significant contributing partner to this project. His latest publication is Settlers in Indian Country. Henrietta Harrison is Professor of Modern Chinese Studies in the Faculty of Oriental Studies at the University of Oxford and Stanley Ho Tutorial Fellow in Chinese History at Pembroke College.  She is a Fellow of the British Academy. Before coming to Oxford she taught in the Department of East Asian Studies at the University of Leeds, and in the Department of History at Harvard University.  Her books include The Perils of Interpreting: The Extraordinary Lives of Two Translators between Qing China and the British Empire (Princeton University Press, forthcoming), The Man Awakened from Dreams: One Man’s Life in a North China Village 1857-1942 (Stanford University Press, 2005) and The Missionary’s Curse and Other Tales from a Chinese Catholic Village (University of California Press, 2013). Priya Atwal is Community History Fellow at the University of Oxford. Her academic work specialises in the history of empire, monarchy and cultural politics across modern Britain and South Asia. Royals and Rebels: The Rise and Fall of the Sikh Empire is her first book, published in 2020. Her research has been featured in collaborative projects with Historic Royal Palaces, among others; and she makes regular broadcast appearances, most recently presenting the BBC Radio 4 series, Lies My Teacher Told Me. She tweets @priyaatwal.

David Armitage is the Lloyd C. Blankfein Professor of History at Harvard University and an Affiliated Faculty Member at Harvard Law School. He is also an Honorary Professor of History at both the University of Sydney and Queen’s University Belfast and an Honorary Fellow of St. Catharine’s College, Cambridge. He is the author or editor of eighteen books, among them The Ideological Origins of the British Empire (2000), The Declaration of Independence: A Global History (2007), Foundations of Modern International Thought (2013), The History Manifesto (2014, co-auth.), and Civil Wars: A History in Ideas (2017). He has held fellowships and visiting positions in Australia, Britain, China, France, Germany, South Korea, and the United States, and in 2019, he was the Sons of the American Revolution Visiting Professor at King’s College London in association with the Georgian Papers Programme and the Royal Archives.