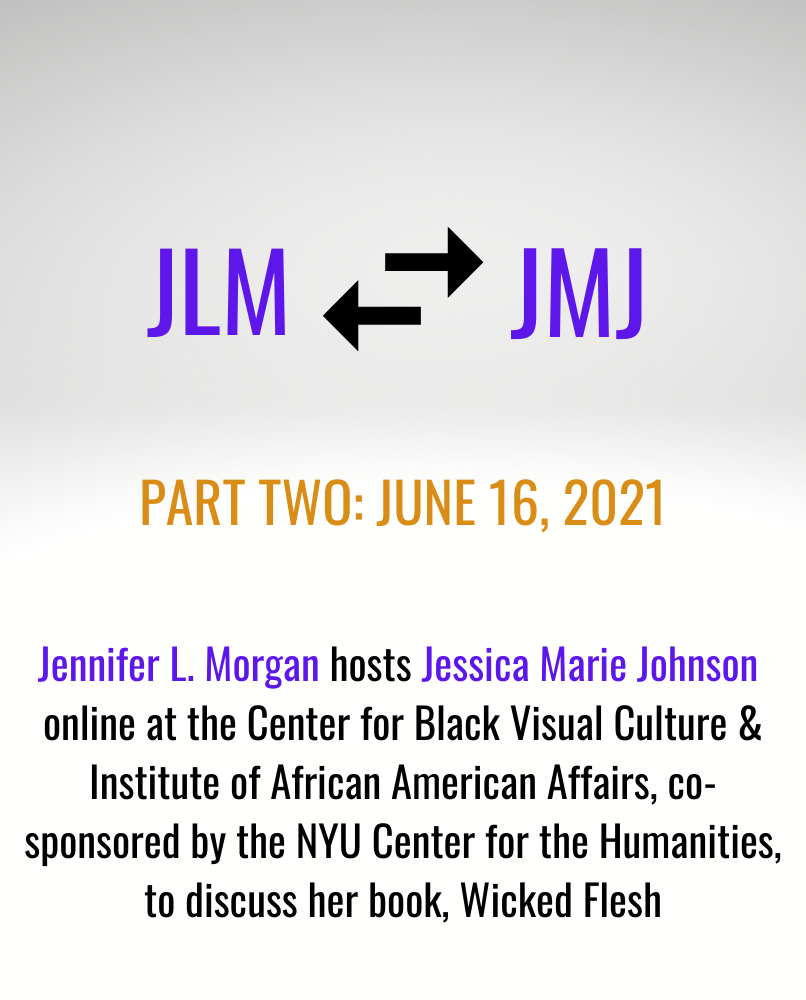 Join the Omohundro Institute of Early American History & Culture (OI) and the Center for Black Visual Culture & Institute of African American Affairs (CBVC) at New York University, in partnership with the NYU Center for the Humanities, online for two conversations featuring Jennifer L. Morgan (New York University) and Jessica Marie Johnson (Johns Hopkins University) on Tuesday and Wednesday, June 15 and 16, 2021, at 5:00 pm EDT. (You only need to register once to attend either or both events.)

On Tuesday, June 15, 2021, Jessica Marie Johnson hosts Jennifer L. Morgan at the Omohundro Institute of Early American History on her forthcoming book, Reckoning with Slavery: Gender, Kinship, and Capitalism in the Early Black Atlantic (Duke University Press). Hailed as “essential reading for anyone who wonders how Black humanity ceased to matter to some, and why centuries later we must still proclaim the worth of Black lives” (Vincent Brown, author of  Tacky’s Revolt: The Story of an Atlantic Slave War), Reckoning with Slavery draws on the lived experiences of enslaved African women in the sixteenth and seventeenth centuries to reveal the contours of early modern notions of trade, race, and commodification in the Black Atlantic. Throughout this groundbreaking study, Morgan demonstrates that the development of Western notions of value and race occurred simultaneously.

For more information, and to order the book directly from Duke University Press at a 30% discount please visit https://www.dukeupress.edu/reckoning-with-slavery and enter the coupon code E21MORGN

On Wednesday, June 16, 2021,  Jennifer L. Morgan hosts Jessica Marie Johnson at the Center for Black Visual Culture & Institute of African American Affairs, co-sponsored by the NYU Center for the Humanities, about her book, Wicked Flesh: Black Women, Intimacy, and Freedom in the Atlantic World (University of Pennsylvania Press). Praised for her “original, bold historical imagination” as well as “a gift for excavating and exploiting fragmentary archival material and a beautiful, poetic writing style” (Emily Clark, author of The Strange History of the American Quadroon: Free Women of Color in the Revolutionary Atlantic World), both Johnson’s argument and theoretical approach are lauded as important and timely. Wicked Flesh examines the self-conscious choices African women and women of African descent made to retain control over their bodies and selves, their loved ones, and their futures as they navigated the peculiar oppressions faced by Black women during the period of slavery.

This evening’s event is also co-sponsored by NYU’s  370J Project, Dept. of Photography & Imaging–Tisch School of the Arts and Skirball Center for the Performing Arts. Jessica Marie Johnson is an Assistant Professor in the Department of History at the Johns Hopkins University and the Sheila Biddle Ford Foundation Fellow at the Hutchins Center for African and African American Studies at Harvard University. She is also the Director of LifexCode: Digital Humanities Against Enclosure. She is the author of Wicked Flesh: Black Women, Intimacy, and Freedom in the Atlantic World (University of Pennsylvania Press, August 2020). Wicked Flesh is the recipient of the 2021 Kemper and Leila Williams Prize in Louisiana History from the Louisiana Historical Association and the Historic New Orleans Collection, the 2021 Rebel Women’s Lit Caribbean Readers Award in Non-Fiction, a 2021 Honorable Mention for the Frederick Jackson Turner Prize from the Organization of American Historians, and a 2021 Honorable Mention for the Pauli Murray Prize from the African American Intellectual History Society.

She is co-editor with Lauren Tilton and David Mimno of Debates in the Digital Humanities: Computational Humanities (under peer review). She is guest editor of Slavery in the Machine, a special issue of archipelagos journal (formerly sx:archipelagos) (2019) and co-editor with Dr. Mark Anthony Neal (Duke University) of Black Code: A Special Issue of the Black Scholar (2017). Her work has appeared in Slavery & Abolition, The Black Scholar, Meridians: Feminism, Race and Transnationalism, American Quarterly, Social Text, The Journal of African American History, the William & Mary Quarterly, Debates in the Digital Humanities (2nd edition), Forum Journal, Bitch Magazine, Black Perspectives (AAIHS), Somatosphere and Post-Colonial Digital Humanities (DHPoco) and her book chapters have appeared in multiple edited collections.

Johnson tweets as @jmjafrx. Learn more about her research here. JENNIFER L. MORGAN is Professor of History in the department of Social and Cultural Analysis at New York University where she also serves as Chair. She is the author of Laboring Women: Gender and Reproduction in the Making of New World Slavery (University of Pennsylvania Press, 2004) and the co-editor of Connexions: Histories of Race and Sex in America (University of Illinois Press, 2016).  Her research examines the intersections of gender and race in the Black Atlantic world. Her newest work, Reckoning with Slavery: Gender, Kinship and Capitalism in the Early Black Atlantic considers colonial numeracy, racism and the rise of the trans-Atlantic Slave Trade in the seventeenth-century English Atlantic world and is forthcoming in June, 2021 with Duke University Press.

She has contributed a chapter to 400 Souls: A Community History of African America, 1619-2019 eds. Ibram X. Kendi and Keisha Blain (One World, 2021).  Her recent journal articles include “Partus Sequitur Ventrem: Law, Race, and Reproduction in Colonial Slavery,” in Small Axe; “Accounting for ‘The Most Excruciating Torment’: Trans-Atlantic Passages” in History of the Present and “Archives and Histories of Racial Capitalism” in Social Text. In addition to her archival work as an historian, Morgan has published a range of essays on race, gender, and the process of “doing history,” most notably “Experiencing Black Feminism” in Deborah Gray White’s edited volume Telling Histories: Black Women Historians in the Ivory Tower (2007).

Morgan serves as the Council Chair for the Omohundro Institute for Early American History & Culture. She is the past-Vice President of the Berkshire Conference of Women Historians and is a lifetime member of the Association of Black Women Historians. She lives in New York City.

The Institute of African American Affairs (IAAA) & Center for Black Visual Culture (CBVC) at New York University are both interdisciplinary spaces for students, faculty, post-doc fellows, artists, scholars and the general public. Founded in 1969, IAAA’s mission continues to research, document, and celebrate the cultural and intellectual production of Africa and its diaspora in the Atlantic world and beyond with a commitment to the study of Blacks in modernity through concentrations in Pan-Africanism and Black Urban Studies. The CBVC, expanding on that mission, is a space for scholarly and artistic inquiry (framing and reframing) into the understanding and exploration of images focusing on black people globally with critical evaluation of images in multiple realms of culture, including how various archives and the development of visual technologies affect the construction of representations. The goals of IAAA & CBVC converge to promote and encourage collaborative research projects, experimental learning and open spaces to the larger community for broad and thematic discussions through various, diverse and dynamic public programming and initiatives by way of conferences, lectures, workshops, screenings, exhibitions, readings, performances, visiting scholars, artist residencies and publications. Founded in 1943, the Omohundro Institute is an independent research organization located on the campus of William & Mary. It is one of the oldest institutions in the United States dedicated to the scholars and scholarship of early America, broadly understood to include all points in the Atlantic World between roughly 1450 and 1820. It produces the premiere journal in the field, the William and Mary Quarterly, as well as prize-winning books and numerous digital projects including the OI Reader web-app and the Ben Franklin’s World podcast.