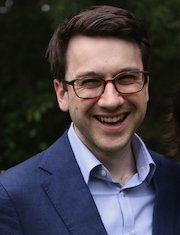 U.S. governments began selling future rights to huge swaths of unceded and unconquered Indian country in the 1780s and 90s, creating a form of property claim that shaped the land business. Situating public finance, land policy, and speculation within transnational debates about sovereignty and territoriality, Professor Blaakman will trace how white Americans of the early national era sought to circumvent Native power and persistence by forging an abstract property regime in real estate that did not yet exist—except in the teleology of settler colonialism.

Michael Blaakman is an assistant professor of History at Princeton University. A historian of revolutionary and early national America, his scholarship focuses on politics, empires, and North American borderlands, and his interests extend to include gender history, the history of capitalism, and microhistory.

Professor Blaakman’s first book project, Speculation Nation: Land Mania in the Revolutionary American Republic, investigates the political and financial culture of a frenzied land rush that swept the new republic in its first quarter-century. The project received the 2017 Manuscript Prize from the Society for Historians of the Early American Republic, and is under contract with the University of Pennsylvania Press. With Emily Conroy-Krutz, he is editing a collection of essays that explore the imperial dimensions of the early American republic.